This is a day or two late, unfortunately.  Saturday was a bit of a rough day as I had a mishap regarding the miniatures I’d put together a few weeks ago. That not withstanding, here’s the update:

This week, I played:

As always, we move on to CardFight Vanguard–

I didn’t get a chance to play any of the game this week. Which is fine as I am still working on building that mythical Mike the Shipwright deck. Speaking of, I got in a second order of them.


Update to our first KickStarter arrival: Masmorra: Dungeons of Arcadia–

We got in a couple games in this week (as noted above), but after the first play, I noticed something about one of the Minor Monster character die:


Either this was intentionally damaged from the shipment or it occurred after our first game. First, the play surface was 100% clear of any and all nonessential components or debris. Second, I even relocated out cat until another room to make sure she didn’t attack/play with the pieces.

Either way, this is a shame considering the cost and length of the project.  This is even more shameful given the early release the game got at GenCon 2016.  That being said, this definitely a blimish towards an otherwise great game.

Finally, there is the Batman Miniatures Game–

As I said earlier, went to primer all the figures I’d assembled due to the lovely weather we had. Somehow, in my stupidity, I ended up dropping the box that had all the components in:


Luckily, with the help of our Miniature Guru, Scott, I was able to repair them all and get them primed prior to having to go to my normal job. After getting them primed, the only remaining casualty was the knife on the Joker henchman’s arm.  Again, another miraculous repair job thanks to Scott.

That pretty much wraps up our week in the hobby. Happy gaming!

Another week has gone by meaning time for an update on all things in that happened for us at Late Night Players.

This week, we played a total of 12 games between 5 unique titles.  Of those 5 titles, 2 were brand new games never before played in our circle.  The games and their totals were:

This brings are total to: 18/500 games played, 4/50 new titles explored. Not bad for the first two weeks of the year.

Moving on, we have CardFight Vanguard–

First, the cards I ordered for my joke deck featuring Mike the Shipwright have started coming in.  I was extremely excited to begin building and testing this deck, then I saw last night’s World Championship finals- Granblue vs Granblue. It was so boring to watch.  And rather the champion cheated or not, he should have definitely been called out for the way that he was shuffling his deck (cards face up).  Both two of those things are a strike against me wanting to continue the construction of this deck.  However, I have to remind myself that I am building neither a G1 or G2 Rush deck, so it hopefully won’t play out that boringly.


Then our order of Revival Collection Vol. 1 came in. The pulls were pretty solid.  We pulled several cards for the clans we actually play. The RRR pulls were: 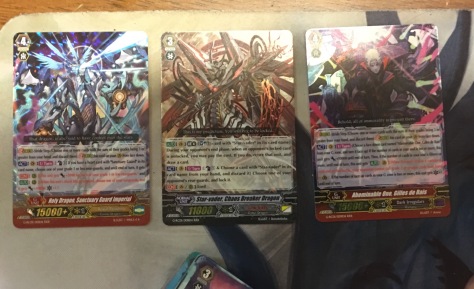 I got in 3 games of Vanguard in as well. Sadly, I went 1-2.  My brother’s Gear Chronicle deck is just too solid versus either of my Link Joker or Shadow Paladin builds right now.

Moving on, we have received our first KickStarter project of the year: Masmorra: Dungeons of Arcadia–


This was definitely a pleasant surprise to say the least.  We talked a little bit about it here. Now to sleeve up all those beautiful cards and start playing.

Then we move on to Star Wars Destiny–

The game is officially the new “hotness” in the tabletop gaming world.  Product is so scarce that $2.99 boosters can fetch $15. Anyways, demoed the game on Wednesday after being told how fantastic it is.  Truth be told, it is rather enjoyable.

Luckily the a couple days later a local shop got in a couple of starters while another a box of boosters.

Unfortunately the weather was not holding up well enough to primer this week, nor did I get an opportunity to assemble any of the others we have.  I think I need to take some time off my normal job just to assemble the rest.

Well, that was our week.  Happy gaming!

Here at Late Night Players, we got a special arrival in the mail today.  After months of anticipation, and the upsetting early release at GenCon 2016, we finally have Masmorra: Dungeons of Arcadia in hand:

Spinning out of the popular Arcadia Quest series, Masmorra is a hidden tile dungeon crawler.  It is for 1-5 players, using an interesting dice and card based mechanic.

The KickStarter managed to unlock an additional 14 miniatures that were all KickStarter exclusives, as well as a limited edition Luke the Lucky miniature, bringing the total to 20 miniatures.  There was a conversion kit available to make all base set miniatures from Arcadia Quest and Arcadia Quest Inferno work with Masmorra. That triples the number of playable miniatures available.

I cannot wait to figure this game out and share it with our group. Maybe a review?

A home for all things tabletop gaming.